We recently asked Riley Johnson to share his experiences and insights about being a competitor in web design and development. Riley was a member of the winning team at our national web design competition in 2016 and a competitor at WorldSkills Abu Dhabi in 2017. Here is what he had to say.

I joined SkillsUSA my sophomore year of high school, and when I joined, I didn’t really know what it was or what to expect. I had been coding and developing websites since middle school, so I thought it would be a good idea for me to select Web Design as my competition. The state competition was really the first web design competition that I had done, so I wasn’t sure what to expect. I remember being super excited when I placed first, but in retrospect, I should have seen it coming.

The national competition was totally different than the state competition in a bunch of ways. For one thing, the competition was administered by Web Professionals, and they made sure to include all different parts of web design in the competition. For instance, one thing that they included that the state competition had not had was an interview. My partner and I had to sit down for a mock interview and explain why we were the best candidates for the job. This was exciting for me because it allowed me to use every skill I had learned from working it web development – not just the coding parts. Another major difference between this and the state conference was the quality of the opponents that I was facing. At the state competition, some of the people we were against didn’t know even basic coding skills, and some were using tools like Adobe Dreamweaver or Adobe Muse. Here, everybody was coding by hand, and knew exactly what they were doing. I saw some of my competitions’ work, and it looked extremely professional.

I remember very vividly the moment that my team’s name was called for the gold medal. I expected that I had lost, so when I heard our names, I was shocked. I jumped out of my seat and frantically hugged the people around me. The thing to know about the SkillsUSA closing ceremony is that it is held in a massive stadium with the seating being well above the stage. Because of this, to get to the stage, you must walk down a lot of steps. As I was walking down, I was extremely shaky and excited, and I almost ended up falling down the steps. Fortunately, I got to the bottom and was able to receive my medal.

Months later, SkillsUSA and Web Professionals reached out to me and asked me to try out for the United States WorldSkills team. I sent in some samples of my work, and three weeks later, I got a call saying that I had been selected for the team. The thing to know about being on the WorldSkills Team is that you have to travel a lot. The team first met in Louisville at the 2017 SkillsUSA National Conference; We didn’t do much in Louisville except get to know each and talk about the competition. Even though we weren’t super productive, I still had a lot of fun. We got to go on stage during the opening ceremony, and we got a box at a Louisville Bats baseball game. The next trip the team took was to Washington, DC. There, we became oriented with the rules of the competition and had lots of time to train. We toured DC, and we got to meet several high-ranking officials at the Department of Education.

My trip to Abu Dhabi started off on a bad note: I wasn’t able to check any of my luggage at RDU [Raleigh-Durham International Airport]. Because of this, I had barely any clothes to wear around Abu Dhabi. In fact, besides for my competition clothing, I had basically nothing else. Despite this set back, I was still able to go and compete. There’s a lot of advice that I would give to someone competing in Web Design at WorldSkills, but if I had to pick one thing, it would be that it’s very nerve wracking. Normally when I develop, I’m sitting in a quiet office or cubical, and I’m not disturbed by anyone. This was not the case for the competition; people are constantly walking by, and I got a large amount of attention because I was from the United States. People would come up to where I was working and point at me and say “American.” This was exciting for me, but it also produced a lot of stress. 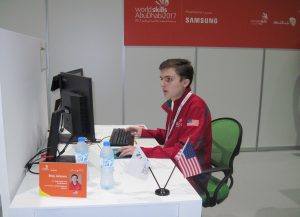 Ultimately, I did not end up winning, but I had a lot of fun and met some great people. Many of the competitors were tremendously talented, and it was an honor to even have the opportunity to compete against them. I think this is a fantastic opportunity for people interested in pursuing a career in web development. You will meet great people and have a unique and wonderful experience. There is not a single event that has had a bigger impact on my professional career than competing in WorldSkills.

As we begin web design competitions (local and state) in 2018, we encourage those reading this to step up and compete. It is a unique opportunity (as Riley will attest).